I'm trying to acquire a single channel analogue input using the I2S DMA. This is somewhat successful in that I can configure the I2S and read data correctly and it gives me sensible values. However. I seem to be getting two channels of the same measurement, separated by 1/f, instead of one. The full test code can be viewed here.

The config being used is shown below:

The image below shows some waveforms with their resultant FFTs. The top waveform is a plot of the buffer (with adjustment to remove the DC) assuming it is a single channel (f=120KHz sampling rate) with a signal source of about 10KHz being read by the ADC. The FFT yields 2 major peaks at about 10KHz and at about (f/2)-10KHz. These FFT signals converge until they overlap and then proceed to diverge as the test signal is increased, so they are definitely related to the single signal. The bottom two are the result of the same data but de-interleaved. The raw measurements (buffer dump of the i2s_read_bytes) can be found here. For these two plots, I am assuming that we have two channels, each sampling at f/2 which yield the expected results.

So it seems I have two interleaved channels, of the same signal, at f/2 sample rate. How do I sample a single channel channel @ 120kHZ instead of 2 channels at 60 kHz?
The most amazing achievement of the computer software industry is its continuing cancellation of the steady and staggering gains made by the computer hardware industry.
(Henry Petroski)
Top

OK. As I watched the tumble-weed pass by, I found out what the problem is. However. I'm unsure of the driver behind the behaviour.

It seems that there are indeed two channels sampling the data and channel 2 is "out of phase" by 1/fs. These two channels are then interleaved into the read buffer as if it were a single signal.
By de-interleaving the buffer and then shifting the second signal by 1/fs (delete the first sample from the array of channel 2) and then interleave back, I now get the signal I expect. Can anyone explain this behaviour? Is there a setting I'm missing?
The most amazing achievement of the computer software industry is its continuing cancellation of the steady and staggering gains made by the computer hardware industry.
(Henry Petroski)
Top

in i2s.h file there is such code ;

So how is your code works at all ?
Top

i have exactly the same problem. Did you find a solution meanwhile?
Top

I have got the same problem.
No matter what, i measure the same signal on all the channels of the ADC1 just with more "noise" when i config the ADC to just one channel.These signals are coming from a signal generator with 4Khz. I measure it with 8Mhz. 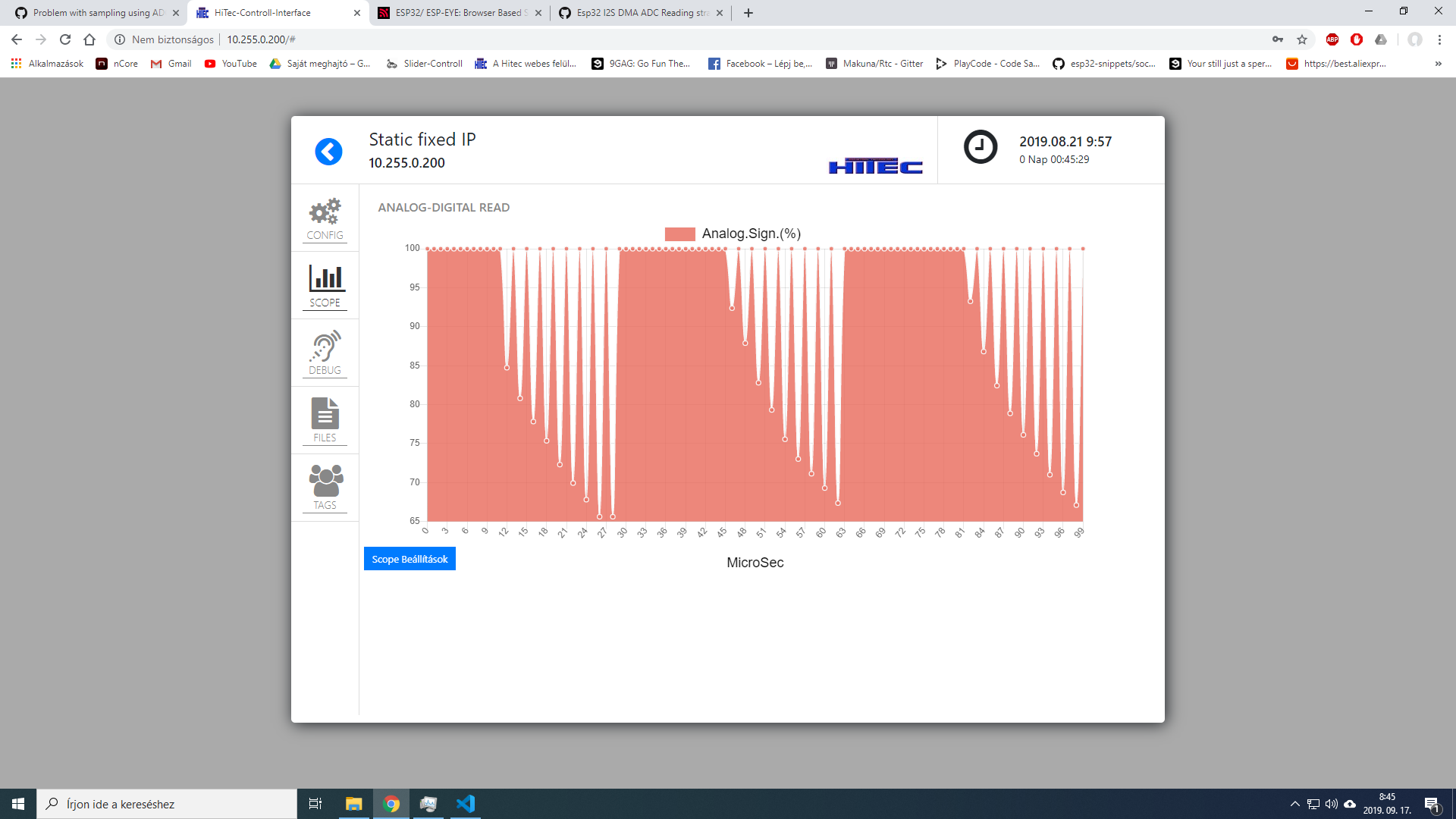 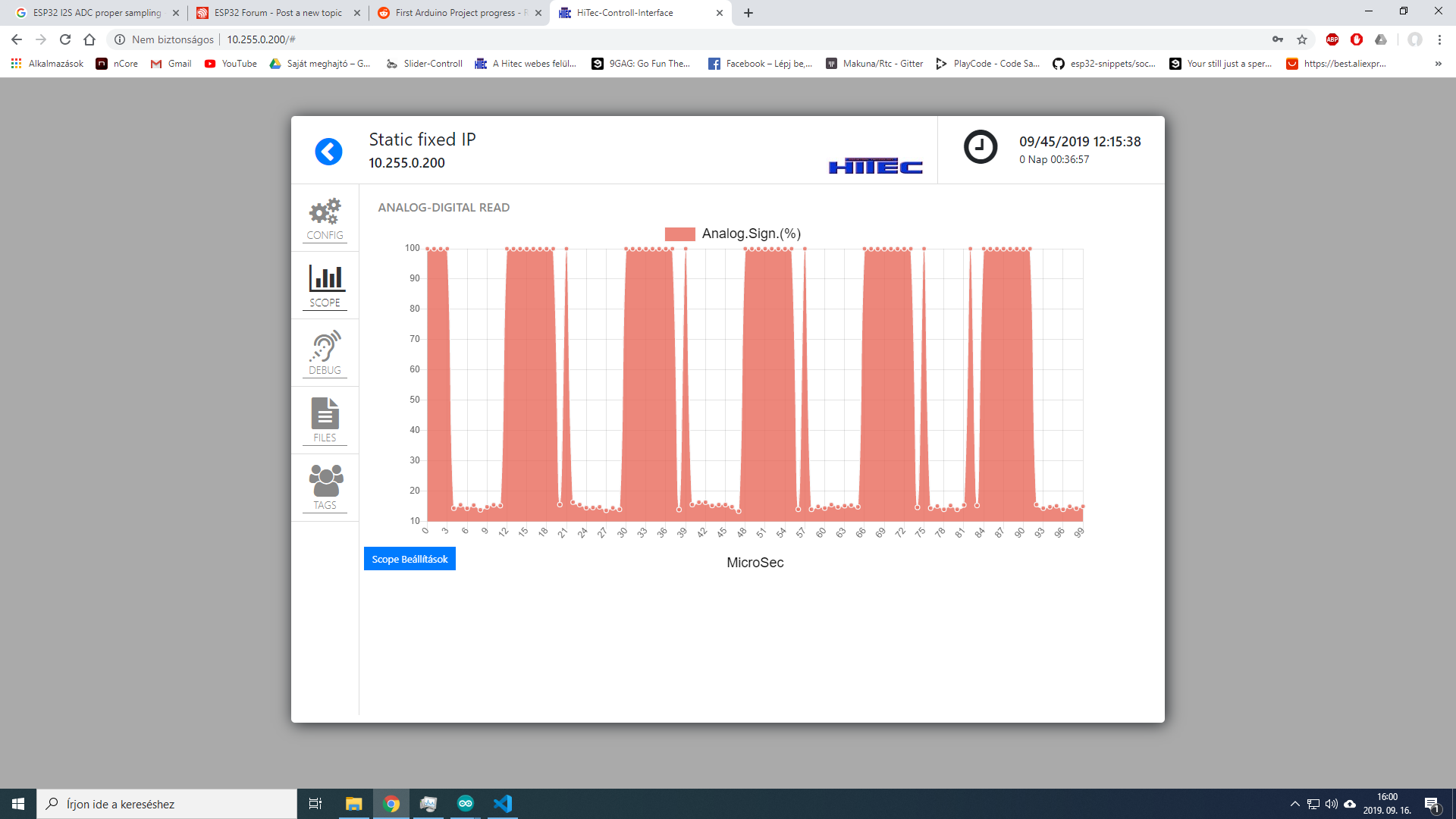 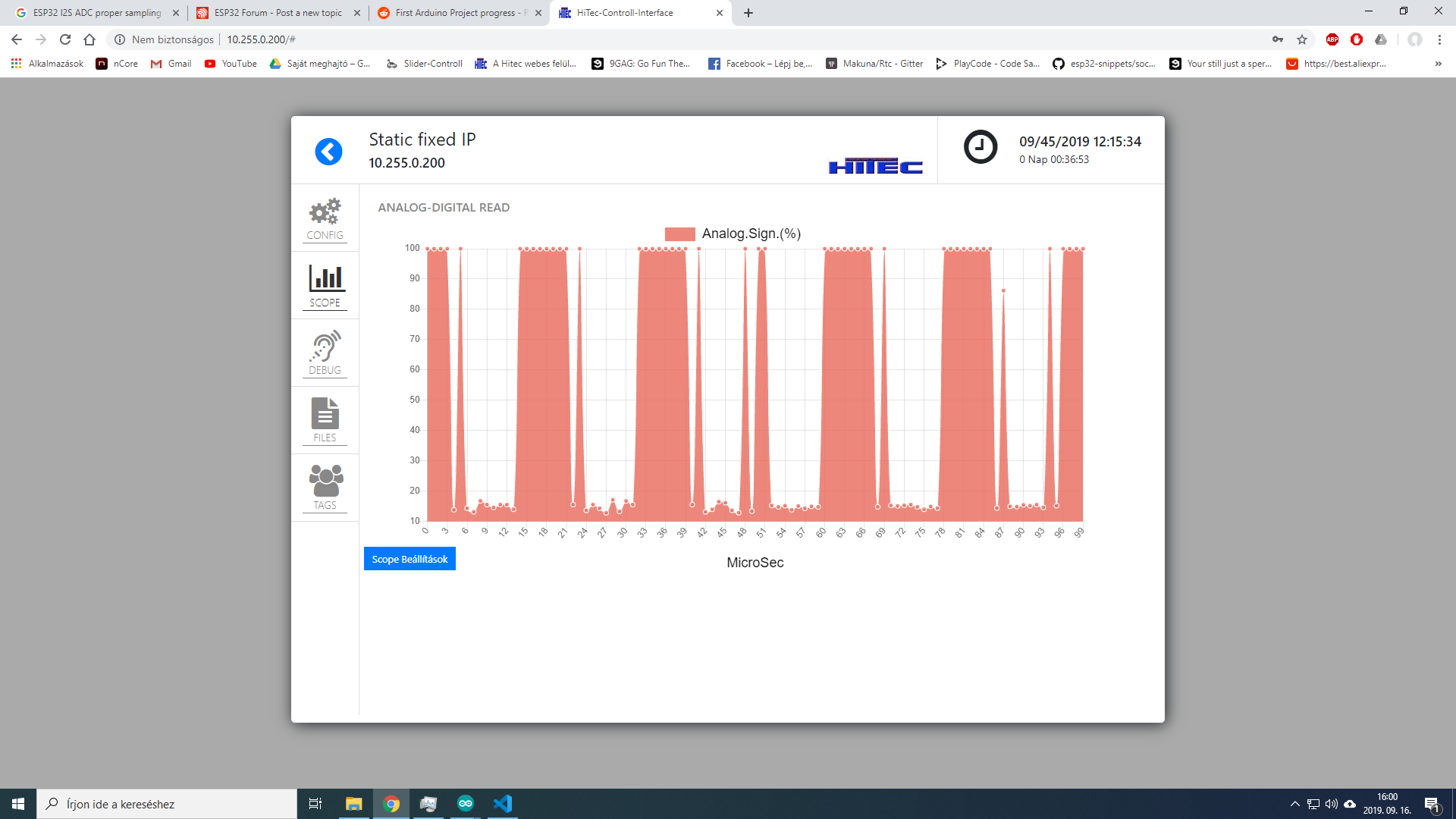 I'm trying to use I2S to read tot samples from channel 4 of adc1 but what i get is always zero.
I attached my code.

Have i to set something in menuconfig to work with I2S and adc?
Is there anything wrong in my code?

Thanks in advance for help

I've got exactly the same problem as AlexMa89, would anyone give us some help?
Top

Hi, i'm yet another person having issues with I2S ADC and DMA. Im trying to use the APLL clock as i need a sample rate of about 44100hz. with use_apll = false i get values returned which are correct but not the correct rate and with use_apll = true all i get returned is 0s. If any devs could post WORKING code that would be great. everything ive tried so far including the offical exampels dont work.
Top

@AlexMa89 @maurogramajo I believe i have fixed the issue thank god. I had to manually power down the apll and then power it up after all the config funcs have been called. the following code can probably be cleaned up and includes optimized but it works.

EDIT: This only seems to work up to 40000 or so frequencey, im gonna try some stuff and reply what I find

I am also on the same issue...

Strangely, no matter which ADC Channel I configure, sampling only works on Channel 0 (Sensor VP) (code from last post).

Anyone else experiencing the same?