ESP32-DevKitC in Ubuntu on VirtualBox

ESP32-DevKitC in Ubuntu on VirtualBox

I am trying to get an Ubuntu VM running in VirtualBox to devote to ESP32 development. The ESP-IDF tool chain installed nicely and I was able to edit and compile the sample project, but I cannot flash it to the dev board because the on-board Silabs USB-serial adapter never seems to mount in Ubuntu as determined by the following command:

The device disappears from the Windows 10 (host OS) device manager, so I do believe that VirtualBox is grabbing it, but it never appears in Ubuntu (actually, it did one time for about 30 seconds but I was never able to reproduce that result). I have installed the Silabs driver in the Ubuntu VM, I have installed Guest Additions in the VM and I have tried both specific and blank USB device filters in the VirtualBox settings. Generally, all my other USB devices work in the VM: laptop keyboard and trackpad, external keyboard and mouse, etc. Although, when I did try the blank device filter, the external keyboard and mouse stopped working in the VM.

Other VirtualBox-related but not ESP32-specifc forum posts imply that USB-serial devices are just not that stable in the environment, but I'd be interested to hear if anyone else has successfully gotten this working.

I've been caught out when my version of the VirtualBox Extensions was wrong (the proprietary extensions are what provides USB support). However if you see a tick next to the "Silicon Labs CP2102..." entry under Devices -> USB, and the USB Controller is enabled under Settings -> USB, then it should pass it through OK.


DonPancoe wrote:I have installed the Silabs driver in the Ubuntu VM

Linux has had built-in support for CP2102 for a long time, so if your Ubuntu versions is less than 7-8 years old then it doesn't need a proprietary driver. In fact, it's quite possible the proprietary driver is the reason it's not showing up correctly as a serial port. Try removing it if you can.
Top

I tried installing the driver because it wasn't working initially, so I don't think that could be the original cause of the problem but it certainly could have complicated it further.

Here's another error I received that implies, to me, that VB is trying to pass the device to Ubuntu but that it is not mounting on the guest side. I'm seeing more Ubuntu forum threads saying that people had to recompile their Linux kernel to fix the problem. I had downloaded this pre-made image from OSBoxes.org, but if I have to recompile the whole thing, maybe I will just build a new one from scratch.

Well, I built a new Ubuntu 16.10 VM from scratch and still no joy. Even confirmed that CP210x support was already present.

By searching the text of the above error message, I found this forum post and, when I applied the listed fixes, got rid of the error. The Windows host registry did list a filter for USBPcap, which was probably installed by another dev board, debugger or packet sniffer dongle I had used in the past. I think that may have been conflicting with the VirtualBox USB filter.

I now have the Silabs adapter checked under the Devices > USB menu within the guest machine, but I still don't have the device actually mounting to Ubuntu yet. Now I have to think through all the other fixes I tried earlier to see which combination works. My best guess right now has to do with adding my root user to the virtualboxusers group and enabling that group to use the VB extensions. Will report further updates.

On a broader topic: once I get this Ubuntu ESP32_Dev VM working, could I just share the whole thing with the community, including ESP-IDF? I have no idea of what the various licenses involved have to say about that.

Not surprisingly, trying to run make flash after this results in...

I'm going to step away from this for a little bit...

I see, you use the DevKitC.
Have you pushed down the "boot"-Button while programming?

erhardd wrote:I see, you use the DevKitC.
Have you pushed down the "boot"-Button while programming?

sry no erhardd
if you forget to push the buttom
it looks like this:

Not surprisingly, trying to run make flash after this results in...

I'm going to step away from this for a little bit... 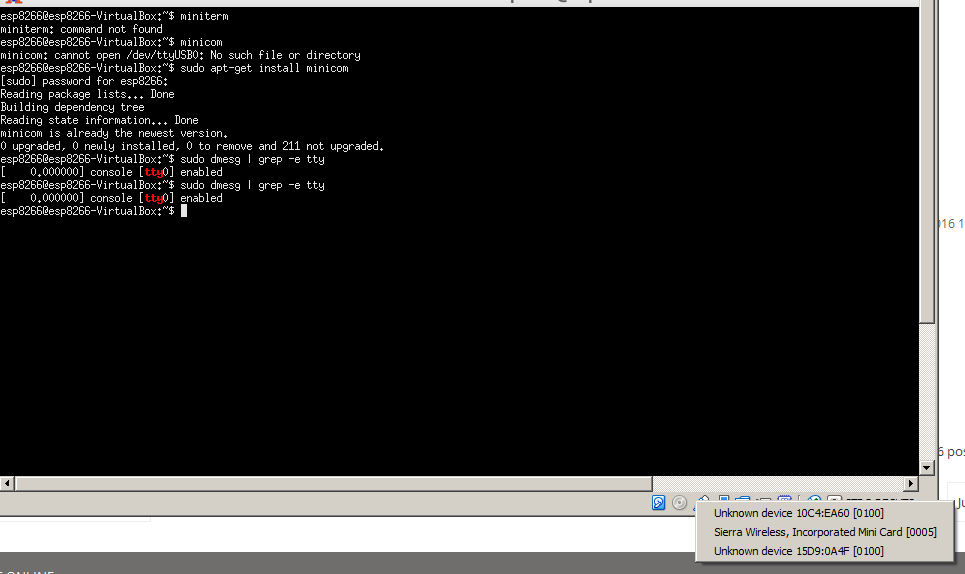 
right click in the vm on the usb sysmbol right buttom corner
you see example this, that there is no given hw to the guest system

after select a hw and privileg to open and allowed 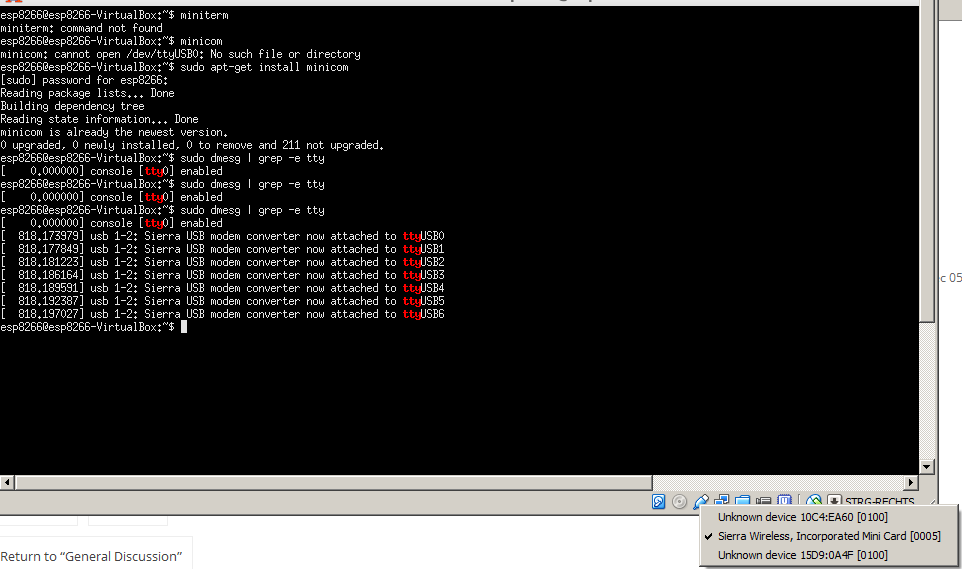 you see the hw in the guest system and you can use it.

from now, the host system has no privileg to use it
if you want use it again, you must deactivate in the VM system again.

thats the sence of a VM sytsem

btw:
i use here in this example DevKitC V2
you see no Silicon Labs CP 21xx or orther things in the Guest system
you see it in the HOST system, that "forward" the HW to the guest system
in my example with Windows as Hostsystem and Ubuntu as Guest System as "Sierra Wireless mini card"

like Angus say
in your example you use ubuntu as Host system
there is usually support for the Silicon Labs CP from kernel
if you want us it, you do not need ( you can not ) install an "extra driver" in the Guest system.
you allways do things over the HOST sytem first, for this, Oracle have advanced packs for USB2, USB3 and so on.

Thanks to Angus and Rudi for all the good information. I seem to have gotten it working consistently on a few tries.

BTW, I am using a Windows 10 host with an Ubuntu 16.10 guest, plus the latest VirtualBox, extensions and guest additions.

First, since I suspected a conflict with USBPcap as mentioned earlier, I uninstalled that. Not sure if it made a difference, but I'll record it here just in case.

Second, I noticed that there were two USB device descriptions that could fit the ESP32, so I included them both in my VBox filter just to be safe. I also checked on USB 3.0 since I believe that the USB port on my laptop that I am plugged into is USB 3.0.

So here are the VirtualBox USB filter settings that finally worked.

When I started the VM with those filters, I was able to achieve this...

Trying make flash again, it didn't work at first, but at least I saw a different result...

Searching Google for that text, I found a few permissions in the Ubuntu VM that I had to change: Finally, make flash worked! My LED is blinking!

Lastly, for good measure, I installed Vim and modded the blinky code slightly to make it my own.
Top

I met the same issue.

When i plug into my linux Mint installed on my second laptop it is recognize by the default driver without other installed driver.

But when i test through Virtual box ( windows 7 host, linux Mint 17.3 guest) even with filterering my device, it is not seen by the virtual box and not list into the /dev folder.

In windows i see in device panel Virtualbox appears so i guess it redirect device on linux.

I installed the good extension related to my virtul box version.

The own things is may be the addon you mentionned that i didn t installed.

Where do you find it and how did you install please ?

I found the issue.

In my case it was really linked to USBPcap installed by wireshark.

I just installed it in winodws in Control Panel\Programs\Programs and Features.
Top
Post Reply
10 posts • Page 1 of 1

Users browsing this forum: No registered users and 25 guests